Gertie N the T.O. Boyz is famous for its crowd-moving, old-time traditional Tohono O’odham music or “waila,” a blend of Norteño, cumbia, and polka sounds. The band consists of Gertie on the accordion along with saxophone, violin, bass, bajo sexto, and drums. All band members are from the Tohono O’odham Nation in Southwestern and Central Arizona. The only female-led waila band on the Tohono O’odham Nation, Gertie N the TO Boyz was the musical band for Borderlands Theater’s “A Tucson Pastorela” for nearly 20 years and has performed all over Arizona’s cities and tribal lands and across the United States. In 2010, the band was nominated for a Native American Music Awards in the Waila Category. In 2016 Gertie received a Lifetime Achievement award from Cultural Sounds of Tucson. She is the recipient of a 2017 Master-Apprentice Artist Award from the Southwest Folklife Alliance in recognition of her work upholding the waila tradition and passing it on to new generations. In 2019 she traveled to Washington D.C. where was a panelist at the Library of Congress in honor of Native American Heritage Month. Gertie considers herself an ambassador for waila music, a form she learned from her dad, Augustine Lopez Sr.

Waila is the traditional social dance music of the Tohono O’odham (Desert People). Drawn from the Mexican norteño tradition, though strictly instrumental, waila musicians play polkas, chotes (two-steps), cumbias, mazurka, and kwalya, a type of square dance danced at festivities of all occasions. bands that typically include saxophones and/or accordions, bajo sexto or electric guitar, electric bass and drums.

Read an interview with Gertie Lopez in the May 2017 issue of BorderLore. 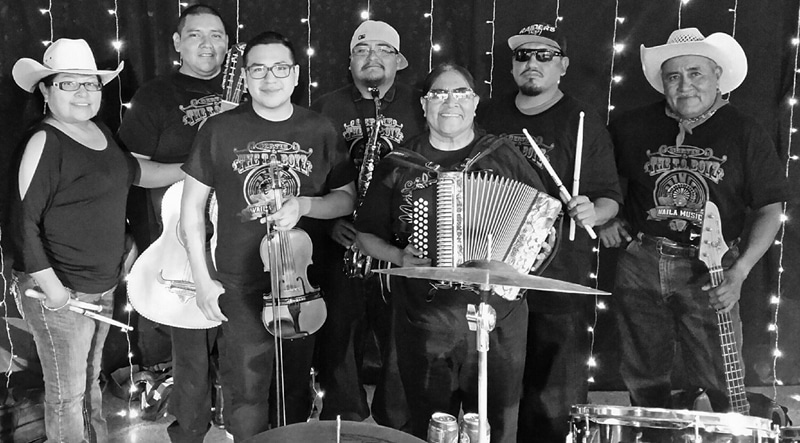