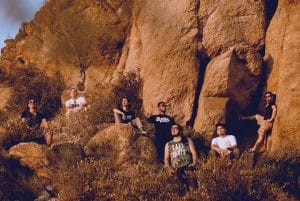 ZeeCeeKeely is a Tucson-based reggae band formed by the band’s front man, Zachary C. Keely. The bands Zach’s messages of peace, respect, reflection, and rights, with the sounds of roots reggae, rock, dancehall, and jazz. In his musical career, Zach has played in supporting acts for performers such as Damien Marley, Steel Pulse, Skanks Roots Project, Hirie, Common Kings, Eli Mac and more, and has performed in Arizona Roots musical festival. The band’s six other members include Carlos “C-los” on percussion, Adam Chavez on bass, Daniel Martinez on keyboards and backing vocals, Mike Clark on percussion and backing vocals, Trey on saxophone, and Justin Nazari on rhythm guitar. ZeeCeeKeely calls their sound “Desert Roots Rock Reggae” and aim to get people up and dancing to the rhythm of their vibrations.