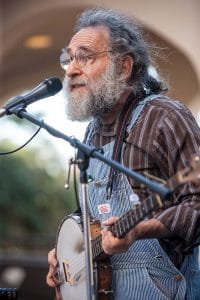 Ted Warmbrand is a folk musician who embodies the spirit of Pete Seeger, using songs to build community, protest injustice, and bring joy to those around him. From peace rallies, churches, bars, street corners, homemade puppet shows, in city council chambers, and schools, Ted has carried the tradition of voicing current issues through song to audiences of all ages and persuasions. In his long-time musical career in Tucson, Ted has worked to translate songs for Nicaraguan musicians he sponsored with his nonprofit, ITZABOUTIME Productions. As an original programmer for KXCI Community Radio, his “Music From the Living Loom” show aired for 17 years and featured topical songs, live performances, and interviews with visiting artists. He is currently working to complete a documentary video preserving the memory of the Tucson Folksingers, 1955-1961, a group of young Tucsonans in the late 1950s, who spawned a folk scene in Tucson brought together civic-minded people to make the Old Pueblo less racist and more peace loving. Their songs and camaraderie gave them strength to be who they were and challenge closed-mindedness.