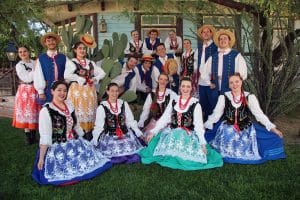 The Lajkonik Polish Folk Ensemble brings colorful, fun, and exciting Polish folk songs and dances to the Tucson community and beyond. Performing in colorful authentic traditional costumes, we bring Polish traditional dancing to life on stage with humor and energy. Presenting a wide array of folk dances from Poland, Lajkonik has performed in Phoenix, Las Vegas, Salt Lake City, Seattle, Portland, and in Rzeszow Poland four times at the international festival of Polish folk ensembles. We are invited to perform at various festivals Slavic, Serbian, Hungarian, Russian and also Mexican concerts. Founder Joanna Schmit was a 2010 recipient of Polish Heritage Award from the Polish American Congress of Arizona, and named a 2019 Recognized Polish Activist in the US West. Her son Matthew Schmit was selected Young Polish Leader in US by Polish Consul General in Los Angeles. Joanna and Matthew Schmit were recipients of a 2017 Master-Apprentice Artist Award from the Southwest Folklife Alliance.