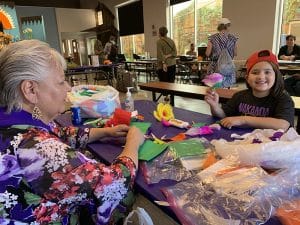 Flowers have a special connection to the Pascua Yaqui and are used in celebrations and memorials. Learn from traditional artists how to make paper flowers and the meaning of these sacred object for to Yaqui/Yoeme people.

You can view this event live on the TMY homepage or later on our TMY Videos 2020 page. To interact with others during the live streaming, you can watch on TMY’s Facebook page or TMY’s YouTube Channel. 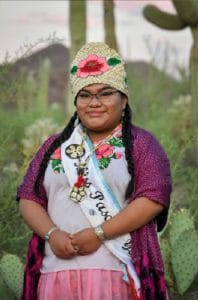 Pascuala Valenzuela is the daughter of Simon Valenzeula and Olvera Monte-Valenzuela and comes from the Barrio Libre 39th community. She is currently a freshman at Tohono O’odham Community College studying social work. Her interest include embroidery and crochet. 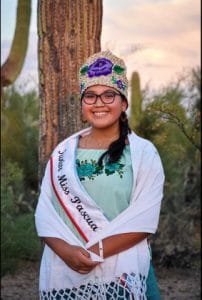 Laylalanai Gocobachi, Junior Miss Pascua Yaqui, is the daughter of Jesus Gocobachi and Almarosa Valencia and comes from the Barrio Libre 39th and New Pascua communities. Miss Gocobachi is currently a sophomore at Tucson High School. Her interests include volleyball and digital arts. 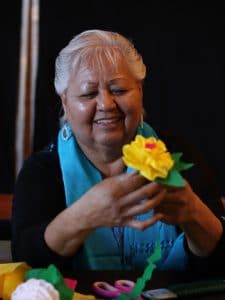 Irene Sanchez, a member of the Pascua Yaqui Tribe, is the daughter of Merejildo Valenzuela Hernandez (Jusacamea) Rivera and Nasaria Guillen Rubio Espinoza Rivera. She was raised in Barrio Libre neighborhood, the fourth child of eleven children and now the elder of her father’s generation. She has worked for the Tribe for 37 years and is currently a patient advocate in the Managed Care Health Program. Irene has been a mentor with Strength Building Partners, a Saguaro Girl Scout Council Group Leader for fourteen years, and a member of Voices for Education. A member of the Yaqui Arts Association, she volunteers with the Yoemem Tekia Museum, and other organizations in the Tucson Area. Irene teaches paper flower making and donates flowers to Yaqui ceremonies, fiestas and other occasions, as flowers represent blessings and are dedicated to the Virgin De Guadalupe. 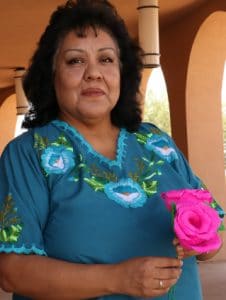 Paula Yucupicio grew up in Old Pascua learning her culture from her parents. She lived in Old Pascua for about 38 years until her mother passed away. “I learned how to make our traditional paper flowers from my mother when I was seven years old. She’s the reason I am here. I’ve been with Tucson Meet Yourself for around 18 years now, in place of my mother señora Ignacia Yucupicio and my aunt Antonia Leon. I believe it’s important to share our tradition so other ethnicities can see the beautiful traditions we have. Flowers traditionally have a religious significance for Yaqui people, they are a symbol of God’s blessings, a manifestation of good in this world. Flowers are used for many Yaqui purposes, including church fiestas, Yaqui altars, Day of The Dead wreaths and other Yaqui ceremonies.”