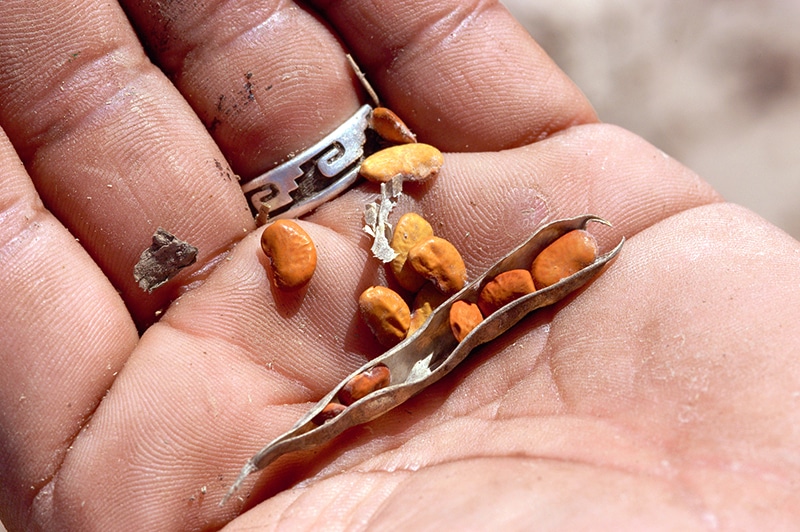 Tucson City of Gastronomy hosts the premiere of a new video by the San Xavier Co-op Farm about the tepary bean, an ancient Tohono O’odham food that continues to thrive in the Sonora Desert due to its cultural significance, drought tolerance, health benefits, and delicious taste. In tandem with the video, farm staff share cultural perspective and modern recipes for White Tepary Bean Hummus and Vegan Red Tepary Bean Brownies.

The San Xavier Cooperative Association practices healthy farming and grows traditional crops to support the cultural and environmental values of the Tohono O’odham people as well as economic development within the community.

Amy R. Juan is of the Tohono O’odham (Desert People) Nation. She is a former Miss Tohono O’odham Nation, a high school culture and language Teacher, and a traditional foods and youth Advocate. She is a founding member of the Tohono O’odham Hemajkam Rights Network, a member of the Indigenous Food Knowledge Network Steering Committee, and Advisor for the I’iolgam Youth Alliance. Amy currently works with the International Indian Treaty Council, an Indigenous led organization which works to promote and strengthen Food Sovereignty, Treaty and Standard Setting, Environmental Health and the Defense of Indigenous Peoples Human Rights.

Francine Bautista is from Komckud E-Wa’osidk Ceksan (Turtle Wedged District) in Sells, Arizona on the Tohono O’odham Nation. She has four children and one granddaughter. They are a very active family. Francine participates in half marathons. In her tradition, running is a way of healing, mentally and spiritual. Francine graduated from University of Phoenix Culinary Program and currently is the event coordinator/head chef for the San Xavier Cooperative Farm.

Maryia Miles is the kitchen assistant at San Xavier Cooperative Farm. She is Tohono O’odham and Pima and member of the San Xavier District. Mrs. Miles comes from a traditional O’odham family and learned how to make cemit, tortillas, with her grandma at a very young age. She enjoys using traditional crops grown on the farm such as mesquite flour, tepary beans and cholla buds, white Sonora wheat, and developing new recipes with a modern twist.

Gabriel Vega is the farm manager of the San Xavier Cooperative Farm. He was born and raised in the Sonora Desert and graduated from Salpointe Catholic High School and the University of Arizona with a BS in Ecology and Evolutionary Biology. His first love with the flora relatives was as child alongside his grandmother in her garden. As an educator and farmer he is focused on food sovereignty and food justice issues providing communities access to healthy traditional foods. Gabriel also a member of the Board of Director’s for the UNESCO City of Gastronomy of Tucson.

Scroll back to top