Foodways Wednesdays: Gardening in Community at The Dunbar Pavilion 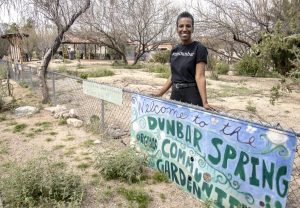 The Tucson City of Gastronomy hosts this introduction to the work of the Dunbar Pavilion and its educational Community Garden. Learn how the Garden is a new programming centerpiece of the historic Dunbar School, a center for celebrating the rich history and culture of Tucson’s African-American community and a hub for collaborative local efforts toward racial justice. Debi Chess, Executive Director; Desiree Gonzales, Wellness Programming Manager; and Garden Manager Yesi Olivera discuss the Dunbar Pavilion’s role in the Tucson community and their collective hopes for the garden with host, E. Liane Hernandez, Culture Kitchen Curator. Tani Sanchez of UA Africana Studies also discusses work on the in-progress Dunbar cookbook project and shares a recipe for sweet potato pie.

Debi Chess is the executive director of the Dunbar Pavilion and an advocate for the preservation and cultivation of Black spaces in Tucson and Southern Arizona. She lives and works in the Dunbar/Spring neighborhood.

Dr. Tani Sanchez is a professor in the University of Arizona’s Department of Africana Studies. She is primarily interested in racial representations in the media and in the study of African American history and culture. She has worked as an editor, broadcast journalist and as a media information specialist. She is the first president of the Tucson Chapter Afro-American Historical and Genealogical Society (founded by Gloria Smith), an active member of the Tucson Black Film Club and is a member of the Women’s Progressive and Civic Club. She holds a doctorate in Comparative Cultural and Literary studies. She believes long-standing continuing oppression will persist if racial problems and their origins are simply ignored, so she works to educate students and community members on the everyday ways that discrimination and racism impact America.

Yesi Olivera is the garden manager at the Dunbar Community Garden. She is originally from the coast of Oaxaca and has Zapotec roots. Her passion for tending to the land & growing ancestral foods & medicines is rooted in her mother’s cooking of traditional Oaxacan food & her abuelitas relationship to the land through farming & wild plant harvesting. Yesi envisions recreating the Dunbar Community Garden as a green space that centers Black and Indigenous people in Tucson reclaiming the land practices & medicines of their ancestors.

Scroll back to top